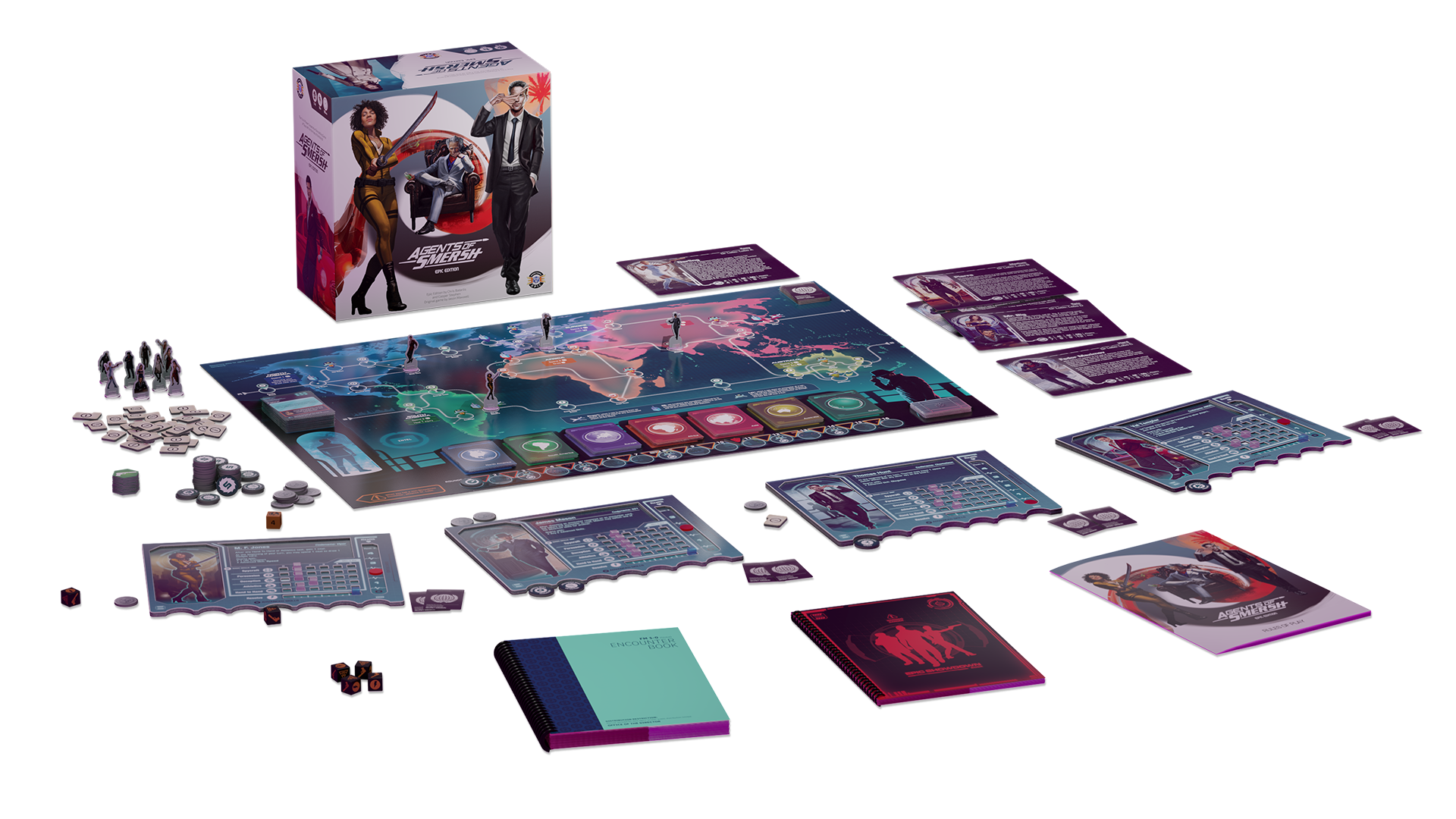 About Agents of SMERSH: Epic Edition

Agents of SMERSH was designed by Jason Maxwell and is published by Everything Epic Games. The new Epic Edition content was designed and written by Chris Batarlis and Cooper Stephen. In this 1-4 player cooperative game, players take on the role of elite spies, traveling the world in search of Dr. Lobo and his deadly agents.

The new Epic Edition introduces the Epic Showdown book, a series of narrative encounters with Lobo and his henchman that build a thrilling conclusion to every session! This new edition updates gameplay and features content from Agents of SMERSH and its expansion: Swagman's Hope.

After Everything Epic had an initial direction for the new gameplay mechanisms, Brieger Creative worked to update past content from the original game to fit the new systems, which included editing on over 1900 encounters from Agents of SMERSH and the Swagman's Hope expansion, updates and theming on new Status, Gadget, and Secret Mission cards, and designing thematic special abilities for 19 playable spy characters. We also did copyediting and developmental editing on the Epic Showdown story writing from Everything Epic designers Chris Batarlis and Cooper Stephen to maintain continuity and ensure mechanical text functioned in the game's systems. For content we contributed, Everything Epic served as editors, which made for a strong back-and-forth.

In addition to gameplay development, we were responsible for internal graphics and non-character artwork, establishing a new visual style and interface that would bring the new edition of Agents of SMERSH to life.

Graphic designer Dann May established a new visual style for the expansion, rooted in a slick, tech-driven aesthetic that is futuristic without locking into a time period. Detailing on the board, card frames, and book layouts works to suggest consistent physical metaphors for each component, such as the book's inspiration from army field manuals, or the status cards designed to look like a high-tech medical readout. Character illustrations were directed by Everything Epic, but we used interface overlays and graphics layering to help meld them seamlessly into layouts.

Following the style we established, layout designer Jason Lam worked under Dann to create an easy to use layout for the game's core component: the encounter book. The original encounter book was a dense set of numbered encounters, and we focused the design of the new book to make it as easy as possible to look up and find the numbered encounter you were looking for.

Page borders are color-coded by region, which matches to the board and to the encounter card that players are using for lookup. Each set of 5 encounters is on a single page, so if you are looking for encounter 01.5.5, you can quickly find page 01.5, then find encounter 5 within that page. This made the book slightly longer, but the extra pages were worth a significantly improved player experience. We saw lookup times drop significantly in playtesting, keeping players focused on the story and moving through the flow of the game. 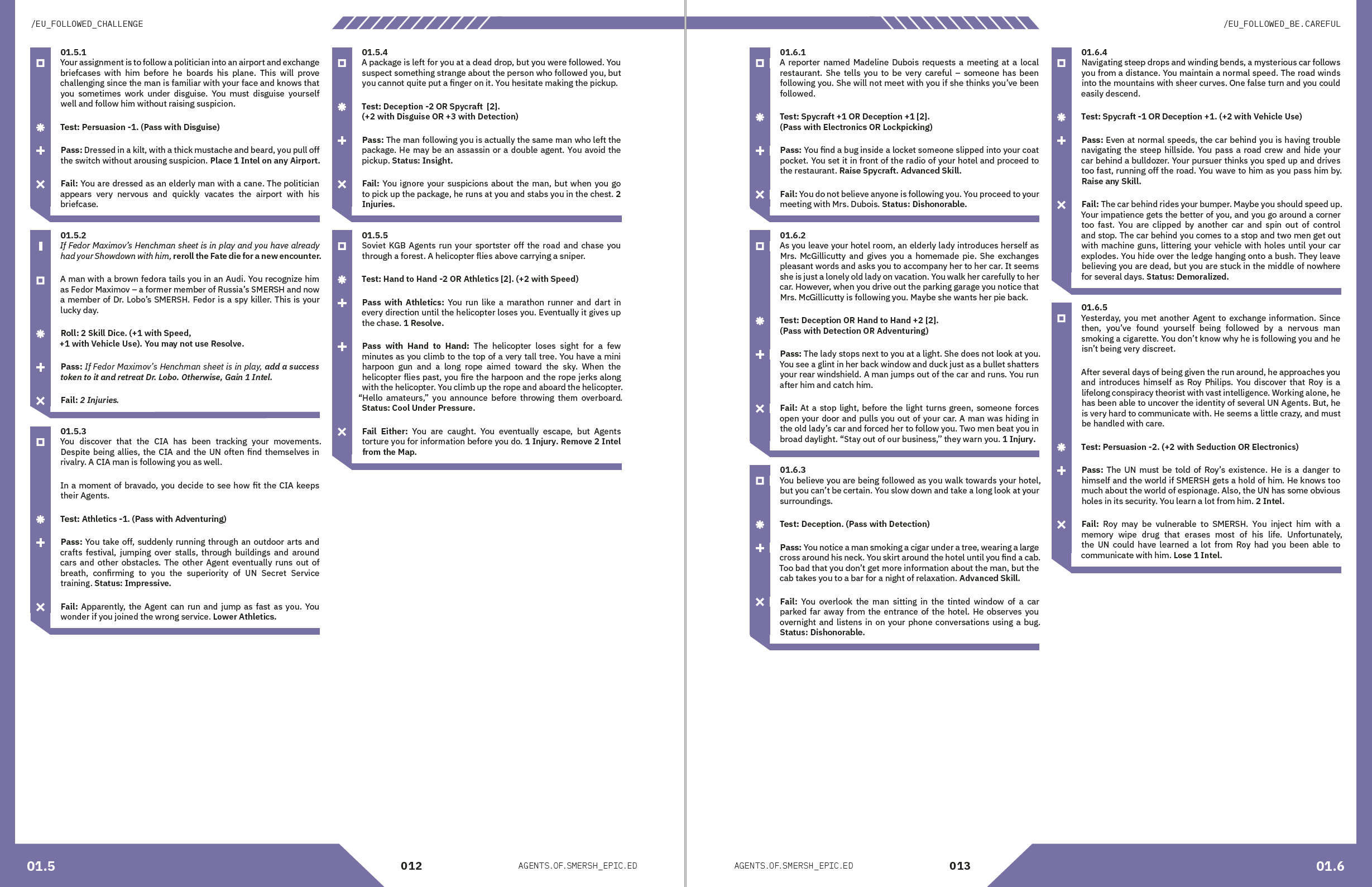 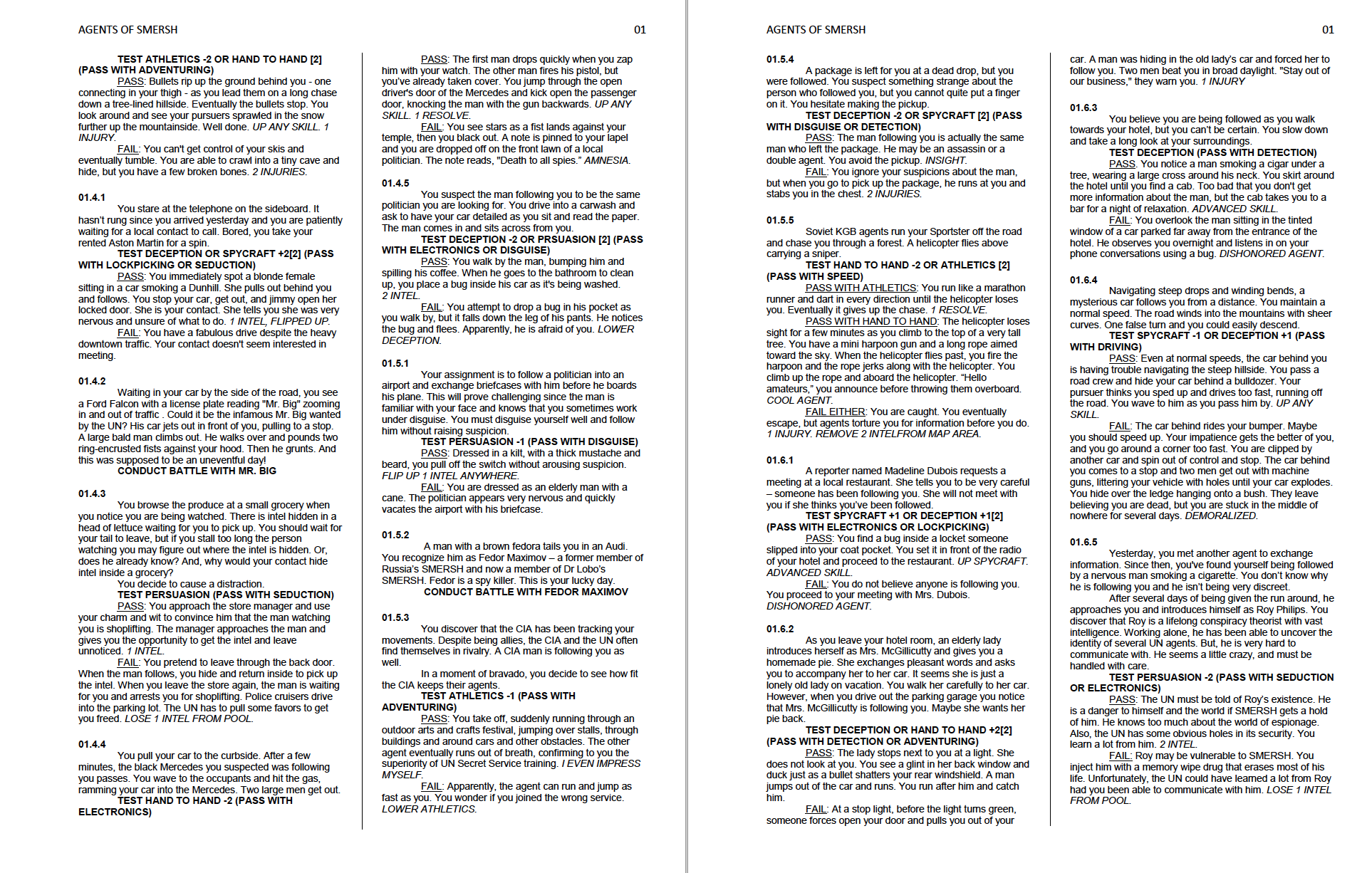 Example spread from the previous edition

As a whole, the new updates bring a cohesive style that serve to highlight the gameplay information while maintaining a rich, consistent feel that supports the thematic universe of Agents of SMERSH: Epic Edition.