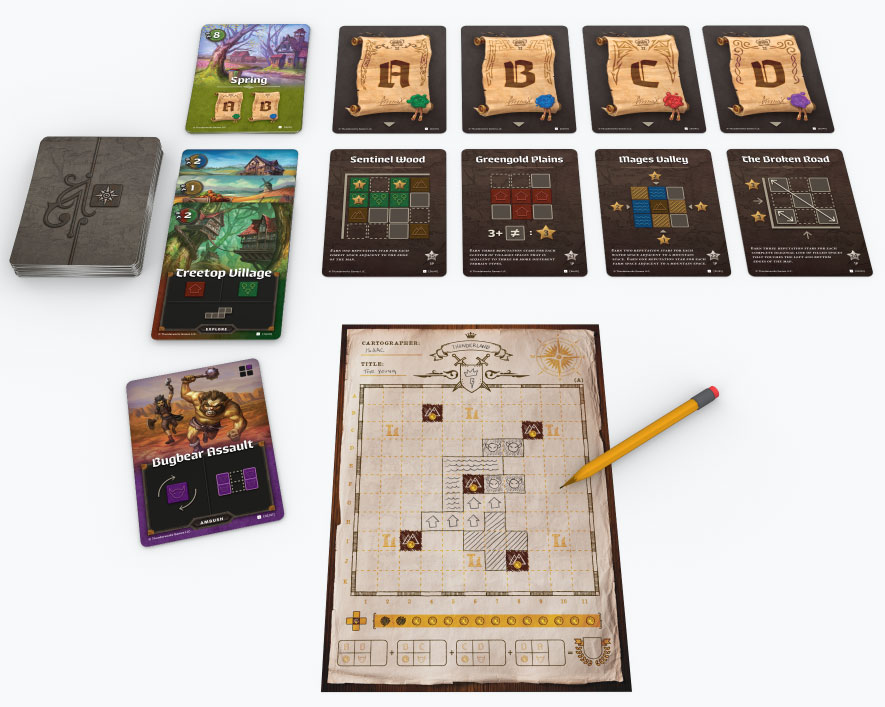 Cartographers, designed by Jordy Adan and published by Thunderworks Games, is "flip and fill" game set in the universe of Thunderworks Games's Roll Player. Players are fantasy map-makers charting a new realm for the Queen — exploring new realms and avoiding the ambushes of dangerous monsters.

Development on Cartographers was built on bringing the best possible fun out of the game's systems, which already had a solid core from the original design. Timing mechanisms that affected game length were a key focus — streamlining play to keep games in a consistent time window, and allowing players enough time to shape and form strategies.

As Thunderworks Games' first direct to retail release, Cartographers also benefited from a small promotional expansion I designed that was available for customers who pre-ordered the game direct from Thunderworks. This helped drive early sales and buzz around the title.

"Generally, I love it when a game finishes and you feel a sense of accomplishment, and I think everyone does in Cartographers." — Eric Yurko, What's Eric Playing

A key part of Cartographer's appeal relative to its competitors is the dynamic scoring system, which changes objectives with every play. With four scoring conditions of a possible sixteen in each game, no two plays are the same. That philosphy extended to the solo mode I designed as well: the title system rewards players differently based on which objectives were in play.

Through the development process, I designed and tested an additional 17 objectives beyond the 8 that were turned in from the original designer, of which 9 made it into the final game. That additional content proved a key factor in many of the positive reviews of Cartographers, which has been praised for its high replayability.

Nominee for the Kennerspiel des Jahres 2020

"I love that scoring variability and how that really drives your strategy for the game... a big winner for me in the genre." — Suzanne Sheldon, The Dice Tower