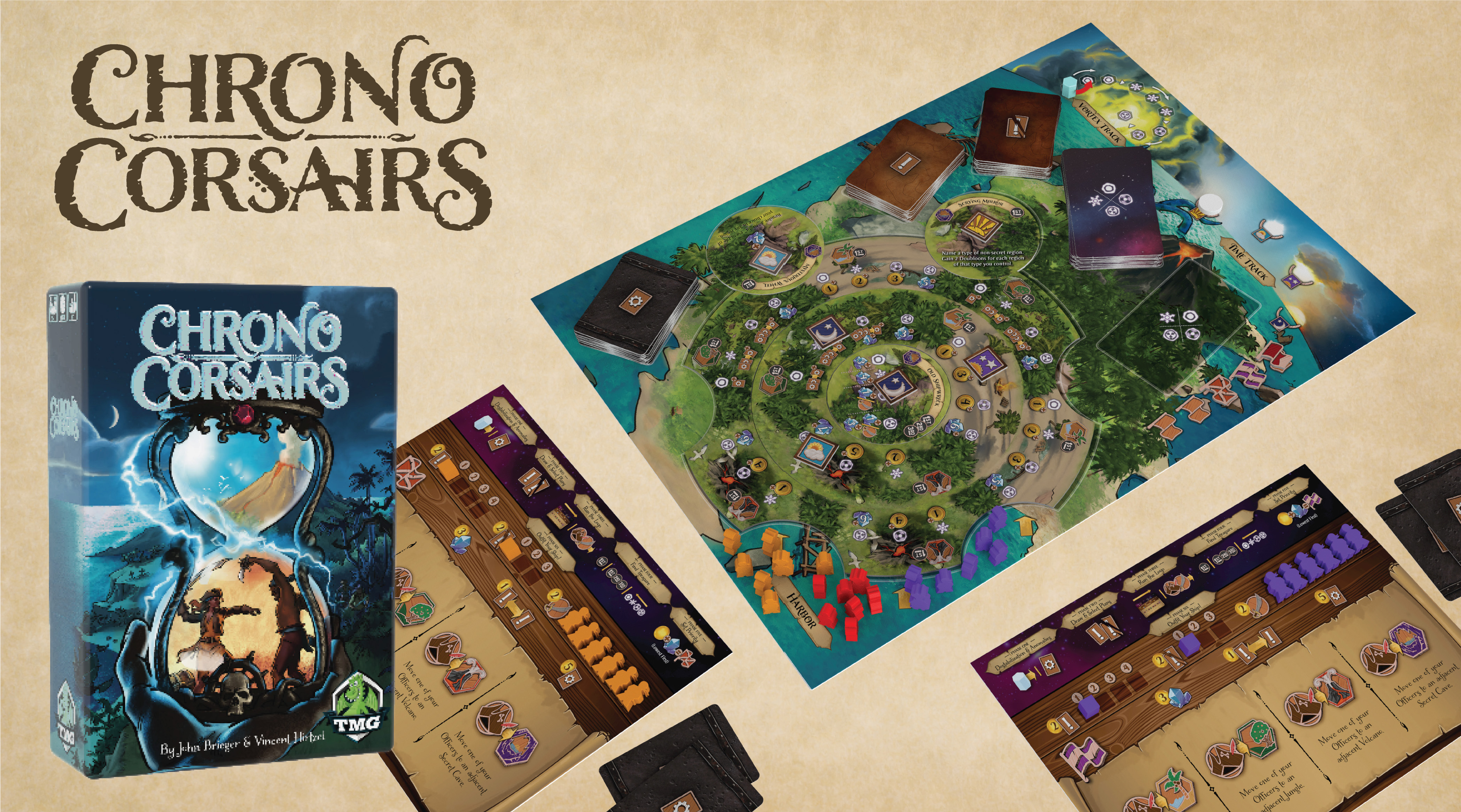 Design Diary: You're Already in a Time Loop

If you think about it — you have no idea if you're just currently in the first iteration of a loop and haven't yet jumped back to the start point. Or maybe you're just a background character in someone else's loop. Has someone near you suddenly demonstrated new skills? Think carefully...

Chrono Corsairs is a time-looping area control game from Tasty Minstrel Games (TMG). You play as pirate crews cursed to live the same day over and over again as you explore a mysterious island. But exploring the depths of how to implement time looping in a board game took us many months of intense playtesting. We (John Brieger and Vincent Hirtzel) are longtime friends from childhood. Though we've designed many games together, Chrono Corsairs is the first of our co-designs to be published.

Game Design is a Time Loop:

The game design process is a timeloop. We make an early prototype — in this case, a very abstract game about time looping scientists. We get feedback and revise the prototype, setting the loop back to the start with a few small changes in the plan.

Refining a prototype is a tricky process — we have a very playtesting focused approach, which is great at identifying when something isn't working, but still relies on us as designers to figure out the best solutions.

Something few people tell you about design (and time loops) is it's not always about making strict improvements. Often the most important decisions are tradeoffs where you explore edges of a design by sacrificing another element. For example, we removed the public draft of cards after many months of testing that showed players enjoyed it. We felt the amount of strategy drafting added to the game wasn't worth the amount of time players were spending reading and analyzing those cards. 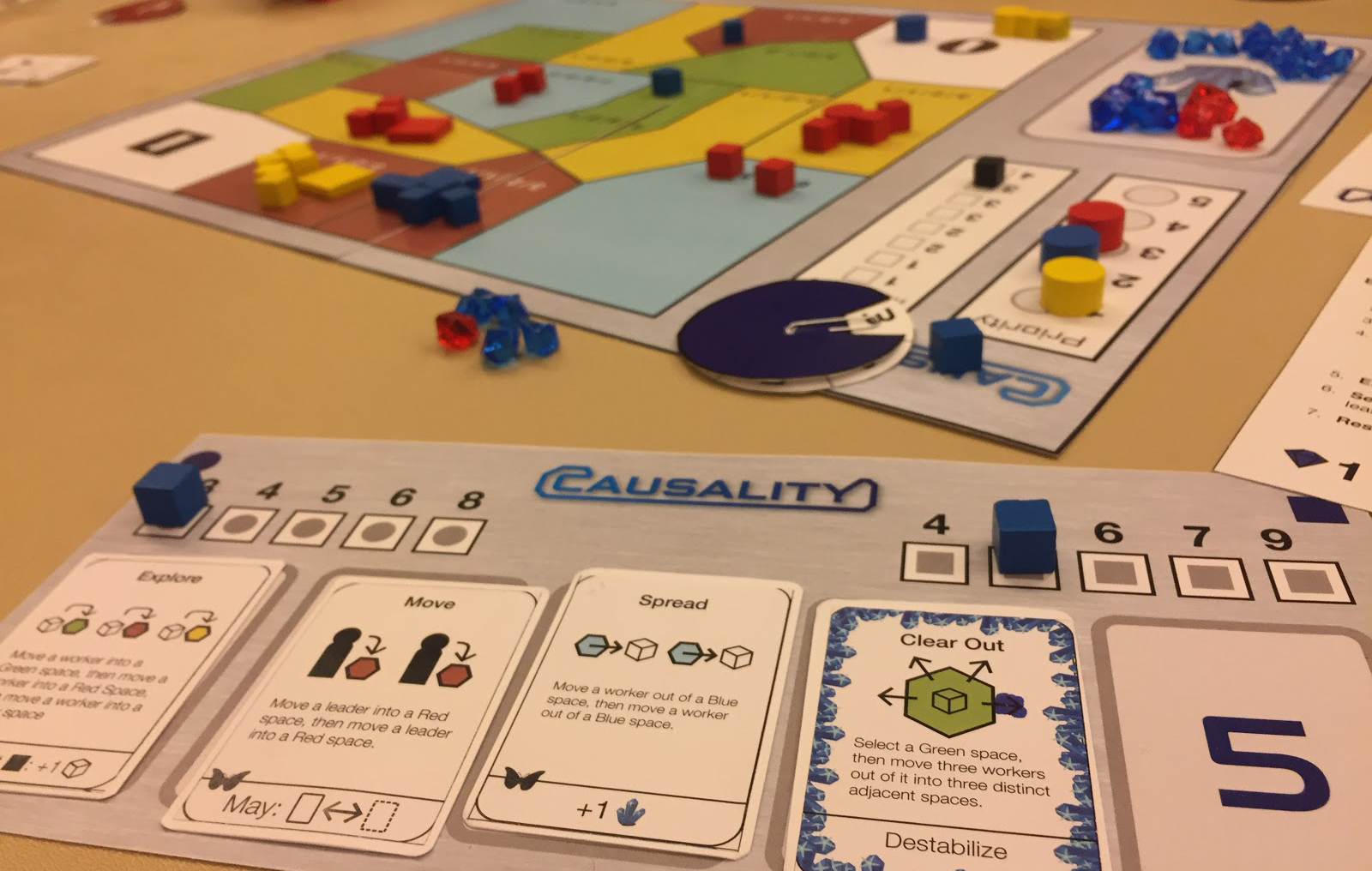 Did that make the game better? We had playtesters who said no: they wanted the additional layer of blocking their opponent's choices. But we looked hard at where the fun was in the game — we didn't feel the interaction in the drafting was as important as driving player's time and attention to the interactions on the board.

After several months of refinement we had a consistently enjoyable, unique game (it even won an award). Playtesters had started saying things such as "It felt like you were planning for your future in your past... which is also your future." Players weren't as sold on the fantasy of being rival researchers, and many of the card names and actions had weak theming at best.

We were convinced something was missing that could push it over the edge. When you're trapped in a time loop (or stuck on a design problem) — sometimes the solution is to try a radical change of plan. In our case — the experience came together when we changed the setting from mad scientists to time looping pirates. We based that decision on a very important design rule:

Everything is funnier if you put the word "time" in front of it.

The new theme improved multiple aspects of play with a single change:

At the same time we changed the theme, we introduced a new mechanism that tied the time looping together: event tiles. The same events occur in the same place on the island every day. If you go the beach at dawn, you might get bitten by a snake. Once one player has found the snake, everyone now knows to avoid the beach at dawn. The events bring the island to life — as you play, you'll learn the little details that help you get an edge in each successive loop.

Board Games are Time Loops:

Almost all strategy games are time loops — the arc of a game's narrative restarts when you set up a new game. Part of the joy of playing strategy games is that you learn from past mistakes and improve each time you play.

In Chrono Corsairs, you get to have that resetting and learning experience multiple times over the course of a single game. So when you're wondering if you'll enjoy Chrono Corsairs — on one hand, it's a brand new game that's unlike almost anything else. On the other hand — you probably already enjoy time looping games...

"This game is so outside the box...it captures time travel probably better than just about any euro implementation of time travel I've ever seen." — Richard Ham, Rahdo Runs Through

"It sounds like someone fell asleep drunk in front of Time Bandits and woke up to find themselves shaping mashed potato into the shape of a game board." — Ava, Shut Up and Sit Down