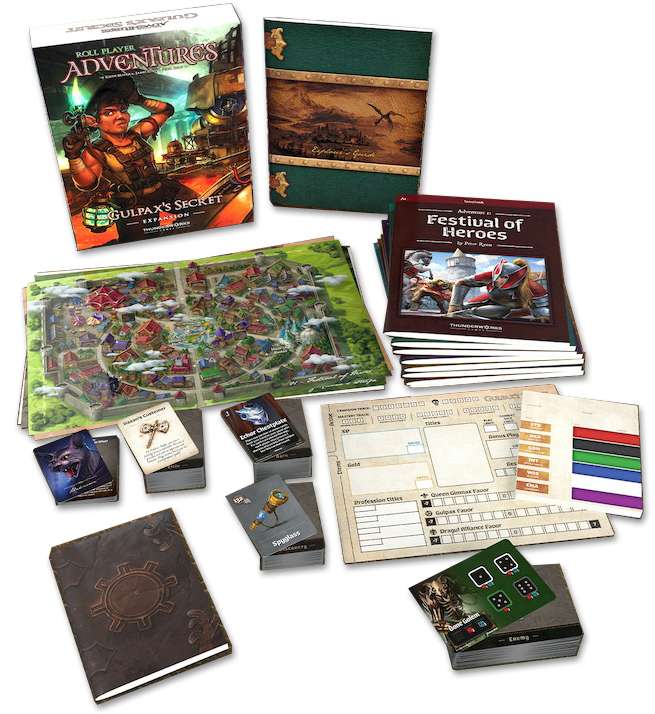 In each of the game's 7 storybooks, you'll be asked to make choices, complete skill checks, and fight battles that will permanently alter the world of Ulos for that adventure and in future adventures. You'll also develop a personal storyline for each character, upgrading your individual profession abilities. Whatever choices you make, someone will remember — and respond.

Roll Player Adventures was developed in close collaboration with the writing team, with playtesting driving writing changes and narrative driving new gameplay elements. The expansion contains over 210,000 words of mechanical and narrative text.

As an expansion, we looked very carefully at how the new expansion would be memorable and distinct from the base game. Gulpax's Secret features lots of late-adventure suprises and an integrated system to give players individualized storylines. Working closely with designer Keith Matejka and writers James & Peter Ryan, we developed Professions, a new system of individualized impact and progression through the campaign.

We started development on Gulpax's Secret with 6 of the 7 aadventures drafted. After initial playthroughs, we knew we wanted to push to expand the individuality of each character. In a game where players contribute to group efforts and make decisions as a party, we wantd to give each player their own chance to shine. To that end, we developed the new profession system: each player chooses one of the eight professions during a new first adventure designed to kick off and highlight their stories.

Each profession comes with a powerful set of abilities, all of which help guide the way you advance your character and can change the way you play. The Animal Tamer above doesn’t just make playing familiar cards better, it also increases the options in the market at the end of each adventure.

Profession abilities give a new axis on which to develop a unique playstyle over time, and their storylines give new content for players to explore with every playthrough. There is something for every profession to discover in every adventure. Some are major moments where you’ll advance a personal storyline. Some are little sideline bonuses, like stopping to chat with a fellow blacksmith.

We also wanted to continue our support for groups to add or remove players in the middle of a campaign without comprimising the storyline content for the profession system. To that end, if you have a player join a campaign halfway through, they’ll get the unique Wanderer profession, which has abilities only usable in 2+ character parties.

"I really like professions overall, it's just a nice addition... that gives you the same depth to the experience." — Alex Radcliffe, BoardgameCo