Cartographers Heroes, designed by John Brieger & Jordy Adan and published by Thunderworks Games, is the standalone sequel to Cartographers: a Roll Player Tale. Players are fantasy map-makers charting the western lands for the Queen — exploring new planes and avoiding the ambushes of dangerous monsters.

Like its critically acclaimed predecessor, players draw on their map sheets and earn reputation by carrying out the queen's edicts. In Heroes, dangerous new monsters change the game with their special abilities, and powerful new heroes can help you thwart the monsters's ambushes. Cartographers Heroes can be played as a standalone title, or mix and matched with the base game of Cartographers for even more variety. 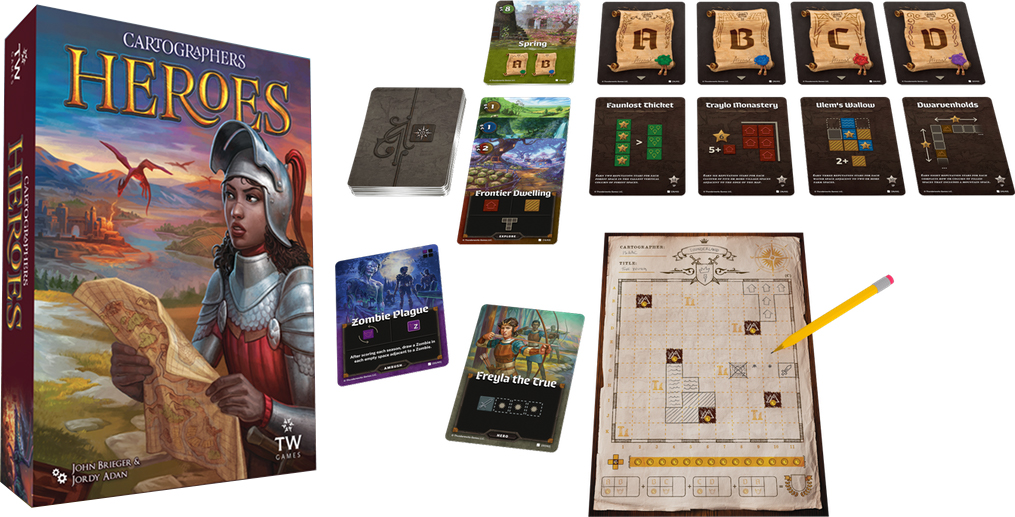 Building on Jordy's excellent design work from the base game let us push thematic integration and explore new space within the game's systems. We concepted, designed, and tested new marketable features for Cartographers Heroes and the map packs from end to end (with the exception of the Affril Map Pack, which was concepted by designer Jordy Adan).

Making expansions for low price point games is tricky. While originally, Thunderworks looked at either a standalone sequel or a dedicated expansion, Brieger Creative proposed that Thunderworks produce a standalone game cross-compatible with the original. This "expandalone" model allows for the sales benefits of converting existing Cartographers owners like an expansion, but without any of the stocking apprehension retailers can feel towards expansions. It also serves as an entry point for new players.

While the English printing is releasing with a crowdfunding campaign, already 9 foreign language partners have agreed to take Cartographers Heroes direct to their respective retail markets, showing confidence in the model. 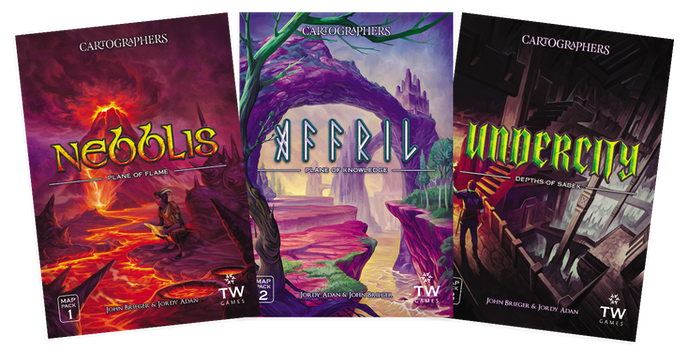 Alongside the new base game, Brieger Creative looked at high-margin ways that to add variety and theme to the Cartographers line. Map packs let us create another key segment of the Cartographers brand tied to iconic locations from Thunderworks's game Roll Player Adventures. Each map pack has rules that fit on a single sheet of paper — providing one key twist to gameplay, along with a new pad of map sheets and three new cards.

These map packs do well as bundled items for web stores, crowdfunding, and convention sales, and can be turned around faster from a development and art perspective than a full expansion, leaving the door open to continue to produce them seasonally should the line stay active. In the crowdfunding run so far, over 85% of backers elected to purchase a bundle including the map packs.

This line extension strategy has successfully activated fans of Cartographers and brought new gamers to the line — as well as continuing to build out the shared universe and theming of Thunderworks's Roll Player titles.

"LOVE this game so much! I love creating the world and making patterns. This whole game is just incredible. It will be fun for fans of Cartographers or even just new players. It doesn't add so much that it is overwhelming. It all just works so well." — Steph Hodge, All the Meeples of the Rainbow

"If you like flip-and-write [games], Cartographers is at the top of that list, and Cartographers Heroes is going to be one step above that... You can't go wrong." — Lance & Sam, Love 2 Hate

"I'm happy about how much variety this adds in general, but also adore the new additions... I highly recommend this game to anyone who is a fan of the original!" — Steph Elizondo, Settler of the Boards